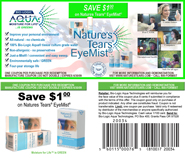 Still not a Single Glass of Water

"The health effects of dehydration in a changing environment are becoming pervasive. Dehydration diseases such as dry eye effects 50% of the population and are becoming a crisis. While I applaud the effort and intent of the national food chart, I am concerned that it does not recommend a single glass of water."

On June 2, 2011, the United States Department of Agriculture published its newly revised nutritional "Food Pyramid" for 2011. The most noticeable difference from the old version is that it is no longer a pyramid (the Food Pyramid had been around since 1992). It is now called "My Plate" and it is essentially a pie chart (except that a dinner plate apparently works better for promoting a balanced diet that a pie).

Sharon Kleyne, founder of Bio-Logic Aqua Research and host of the Sharon Kleyne Hour - Power of Water syndicated radio talk show*, applauds the government's attempt to improve our national eating habits. "In our society," she says, "getting people to simply cut down on burgers, fried foods, donuts and soda pop, or to even be aware of what they eat, is a major accomplishment. People often don't realize that what you eat affects who you are and every aspect of your life and health.

Mrs. Kleyne is concerned, however, that My Plate does not recommend water as part of a balanced diet. "Water is critical," she explains. "Especially since an obese person's body usually contains 30 to 40 percent less water per cubic inch than the body of a lean person. A diet with too little water can lead to poor health and numerous preventable dehydration diseases. Some dehydration diseases, such as dry eye, are rapidly becoming a global public health crisis."

Although the My Plate chart tends to be fairly middle-of-the-road and basic, it is accompanied by a list of suggestions that, according to Sharon Kleyne, is basically sound:

Water: Water is the most fundamental of all nutrients and the basis for all life on Earth. Without water, food cannot be digested, processed or utilized.. The average American drinks far too little water and there is a major health impact as a result. Excess weight makes the problem much worse. Sharon Kleyne recommends drinking a minimum of six to eight glasses of room temperature water a day (This in addition to fluids such as juice, coffee, tea and soup. Sugar and carbonated drinks are dehydrating and not recommended).

Mrs. Kleyne offers a simple suggestion for My Plate: Place a glass of water on the diagram, alongside the recommended glass of milk.

Education: Learn all you can about nutrition and digestion/absorption (nutritious foods may not always be fully digested), and keep track of what goes into your body. Proper nutrition can save lives and also save billions of dollars (Fresh produce is the biggest bargain in the grocery store). .

Grains: My Plate's Grain recommendation may be inflated, although it has dropped from 40% of the diet on the old Food Pyramid to 30% on My Plate. Most grain foods in the American diet contain empty calories and carbohydrates that should be eliminated or cut way back. On the other hand, grain foods that are not empty calories, such as wild rice, may be too nutritionally concentrated to be eaten in large quantities. The only grain foods that might reasonably constitute 30% of a diet are bran cereal and brown rice (although All-Bran, like wild rice and unlike bran flakes, is difficult to eat in large quantities).

Eat locally: Food is most beneficial when eaten in season and when grown near where you live. Sharon Kleyne applauds Walmart's attempts to purchase fresh meat and produce locally whenever possible rather than importing them out of season from Mexico or Chile. This not only improves freshness and nutritional benefit, it saves on transportation costs.

*Don't miss the Sharon Kleyne Hour - Power of Water Mondays at 10 a.m. PST/PDT. The syndicated show may be heard on Voice America/World Talk Radio, Green Talk Radio and Apple iTunes. Go to www.SharonKleyneHour.com for summaries and replays of past shows.